J.D. LEWIS – Artistic Director and Founder of The Actor’s Lab 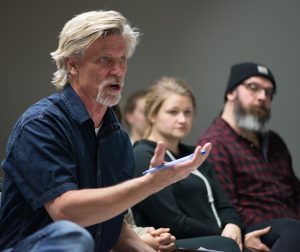 J.D. Lewis began his career in 1982 in the Wim Wender film, ‘Hammett.’ After doing a number of films in Los Angeles, he moved to London, England where he spent three years in a repertory theatre company, touring England, Scotland and Wales. During his stay in the United Kingdom, he starred in ‘The Plaything’ at The International Fringe Festival in Edinburgh, Scotland.

Lewis has appeared on shows such as Friends, ER, Suddenly Susan, Midnight Caller, Oliver Beene, Dead Last… all the way back to L.A. Law. He has worked with some of the great film directors such as Wim Wender, Mimi Leder, Robert Singer, Rob Bowman, Gary Halvorson, Philip Charles MacKenzie, and Paul Leder. As an artistic director, J.D. lead The Digby Group, an award winning bi-coastal repertory theater company, in producing shows on both the East and West coast. In addition to teaching, he is an actor, writer, director, philanthropist, and father of two boys.

The Twelve In Twelve Foundation

To date, Lewis’ proudest accomplishment has been setting a world record with his two sons in 2012. They are the first family in history to have traveled to all seven continents in one year, specifically to do humanitarian work.

The family has been named “American Heroes” by the Huffington Post, where J.D. is a well established blogger. Their travels have been documented by ABC News, CBS News, NBC News and Fox News. And they have been featured in numerous magazines and print articles including a feature story in Parade Magazine.

Learn more about Twelve in Twelve